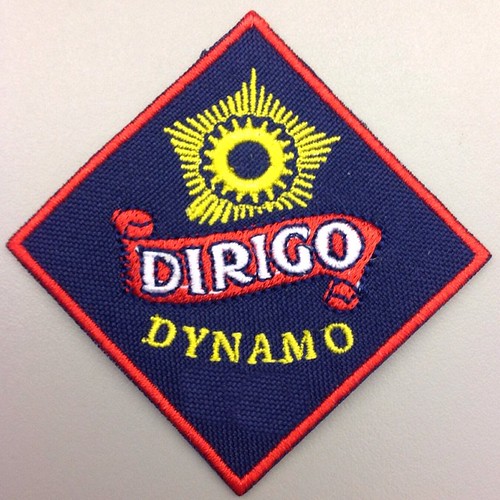 The camaraderie of the midnight wheels.
Welcoming the close of twilight.
Moonlight reflecting over the ocean.
Midnight libation.
Quietly rolling through shuttered streets.
Stifling yawns along an unpaved path.
Dynamo lights cutting through morning fog.
Sun rising above the beach's distant horizon.
A breakfast for the weary and satisfied.

To a cyclist, a dynamo is a small wheel-powered generator typically used to light one's way, particularly useful for overnight rides. The Dirigo Dynamo is an overnight ride from Somerville, Mass. to Portland, Maine. The goal is to enjoy the ride; next is to see the sun rise at Old Orchard Beach.

But don't only consider my perspective, consider Lovely Bicycle's perspective of the first Dirigo or Yurtville's view of the second. Or, if you aren't a fan of reading, just look at the photos.

"By the shortest full moon, we ride." anonymous 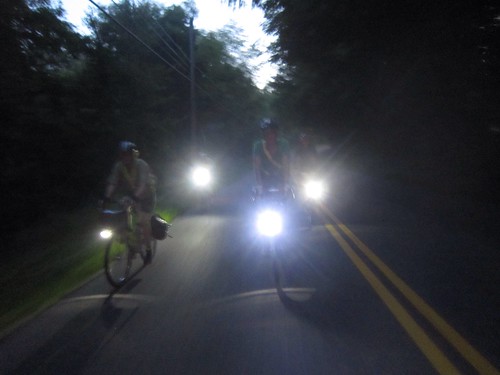 Over the years we have found two good overnight routes. They are one-way and about 200km (120miles) each. Both follow Route 1A along the New Hampshire Coast from Newburyport to Portsmouth; the moon over the Atlantic is serene. And both share portions of the unpaved Maine's Eastern Trail; with such a dense canopy that even the moon struggles to penetrate. In Massachusetts and Maine there is an inland route (RWGPS route) and a coastal route. Since the middle of each route is the same, it is easy to swap routes halfway through. Of course, there are countless route variations. However, ...

"When you go to explore, the number you should have is four." Sandra Boynton

Cycling overnight is an exploration. Few businesses are open before midnight, and none afterwards. Help is often hours away (though 911 still works). Route navigation and repairs are more challenging than normal. Not to mention that most cyclists become quite tired in the wee morning hours. Self reliance is not enough, group reliance is the best plan. At minimum cycle in pairs, and preferably in a foursome. 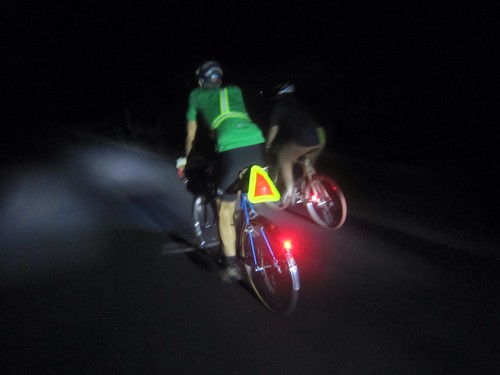 Inherent in nighttime cycling is reliability, preparedness & visibility. As there is little ability to be rescued in the middle of the night, bicycles must be in their best mechanical condition; get a tune up. With few to no opportunities for outside assistance, a sufficient supply of food, water and repair tools is important. A cloudless night is neither reliable nor consistent, the bicycle, cyclists and road must be illuminated. The New England Randanneurs website has a great section on lighting and visibility, including both recommendations and legal requirements.

Somerville (Boston) and Portland are well connected for a one-way ride. The Amtrak Downeaster provides car-free connection between the cities, and will carry your bike with a bike ticket. Most Dirigo Dynamo cyclists have used the Downeaster to get home. Another option is Concord Coachlines. Of course, Portland based cyclists could take the train or bus down the day before and be at home by the end of the ride.

Rendezvous points have been used to meet with other cyclists, wait for other cyclists who have fallen behind or just to rest with others. Cyclists often rendezvous in Newburyport at Bartlett Mall, often to meet up with North Shore cyclists. In Portsmouth, cyclists rendezvous at either Portsmouth Brewery or the Flying Toast for a midnight snack. Just north of the pier in Old Orchard Beach is the popular place to rendezvous for sunrise. Many rendezvous at Standard Baking Company in Portland for breakfast and at the Amtrak station for the train ride home.

Some cyclists have found the need to truncate the ride. The last MBTA train from Newburyport to Boston is at 9pm (the preceding outbound train can be used to join other cyclists latter in the route at the Bartlett Mall rendezvous). The coastal route in Mass. also offers the opportunity to catch the train to Boston in Hamilton, Ipswich and Rowley. Another point of departure is at Portsmouth, NH. The first C&J bus south is at 2am (only to Logan Airport; the 3am goes to South Station). The C&J bus also stops in Newburyport at 9:30, 10:30 & 11:30pm (all go to South Station).

It's good to meet at a neighborhood cafe to catch a light dinner and coffee before hitting the road. Bloc 11 in Union Square is a favorite as it provides a nice outdoor space to gather with bikes. Also, the SomerVelo bike shop is around the block for last minute repairs & spares. Including sufficient time for repairs and rest throughout the ride, to catch sunrise at Old Orchard Beach (between 5 & 5:30am) a good departure time is 5:30pm, meeting 30 minutes earlier.

The Dirigo Dyanmo is an unorganized ride, not affliated with any group or organization. The above is simply a collection of shared wisdom garnered from previous rides. Preparation, including preferred routes, cue sheet, maps, etc is the responsibility of the cyclists. There is no fee as there is no one to accept it. The following comment section is for interested cyclists to coordinate their own Dirigo Dyanmo rides. 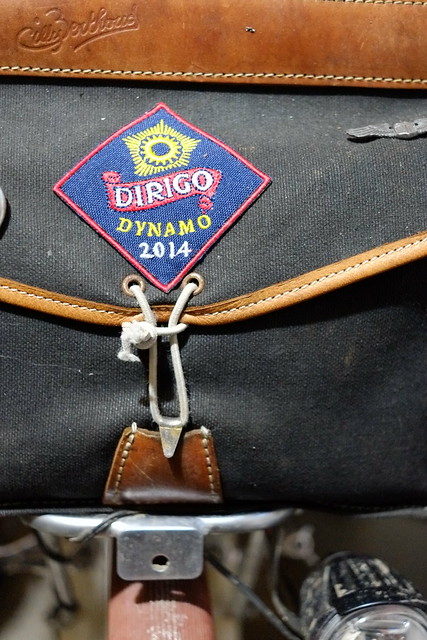 Posted with Blogsy
Posted by Unknown at 11:37 PM No comments:

Tales from the Dirigo

Earlier this year was our second Dirigo Dynamo, an overnight bike ride from Boston to see the sunrise at Old Orchard Beach. The route starts in Somerville heads north through Massachusetts and the New Hampshire coast, arriving in Portsmouth around midnight. We proceed through Maine, following the well-signed Eastern Trail. Most of us return by train from Portland on the Downeaster. A couple ride reports follow:

I grew up on the coast, and I'm accustomed to many US beaches, particularly in the south. Recently I found the most dramatic beaches may be those of the outer cape along Wellfleet and Truro. 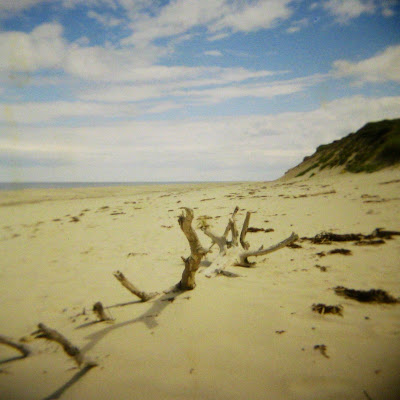 The outer cape is an easy place to get to from Boston with the ferry (Boston Harbor Cruises & Baystate Cruise Company), especially since it is easy to carry bikes on board, even cargo bikes fit easily. The corners getting on the ferry and through the ferry cabin are tight and require some rear wheel lifting, and the gangway in P'Town is on the narrow side. I've heard that a loaded Longtail will fit, but I'm not sure about a Workcycles Bakfiets. All in all very doable and easier than getting a cargo bike on & off the Downeaster. 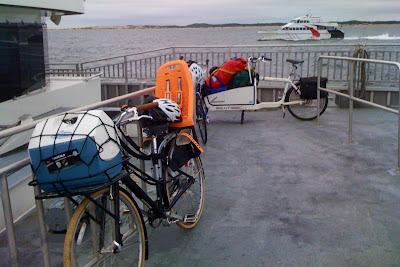 Of course once in P'Town there are many activities and places to stay. We visited many times before but can be a bit crazy, and we were looking for something more relaxing. So, we headed south to the sleepy town of Truro. The ride along Shore Road is nice with views of Massachusetts Bay with numerous vacation cottages along beach line. It is flat and a little windy.

But once Shore Road leaves the shore it becomes very hilly and remains so through Truro and into Wellfleet. When riding an overloaded cargo bike (or with a kid and a full basket) the ride becomes more work and less fun. There are no mountains on the Cape, but don't let the hills on the outer Cape fool you, they are steep and relentless when it comes to casual touring. I haven't found a flatter route, which is frustrating since there once was a railroad to P'Town, much of which is now a rail trail. But that flat route across Truro was dissected by homes.

Worse than the hills was US 6, a four-lane highway that provides the only link through Truro. This is a one mile section along US 6 from Shore Road to Castle Road, with no parallel route. Despite the generous shoulder, this one mile of cycling with uncomfortably fast traffic sucks all of the enjoyment out of the bicycle ride. We won't cycle to Truro again until we find an alternate route, but many families are less daunted by fast traffic.

An ocean side alternate might exist using the Old Kings Highway, which may be less hilly but mostly unpaved. An exploratory trip is in order. Some good friends tried a similar route with mixed results. 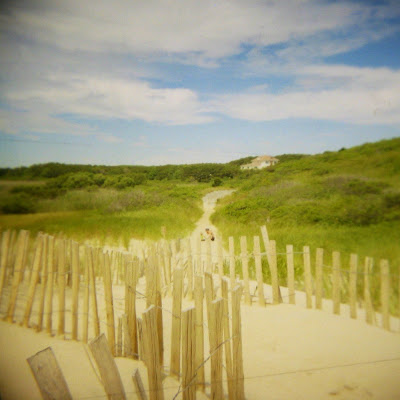 And then we arrived at the Truro hostel and all was good in the world again. The hostel is an old life saving station, precursor to the Coast Guard where men were stationed to rescue shipwrecked crew and passengers. It is at the end of North Pamet Road, within sight of the beach. And a nice beach it is. 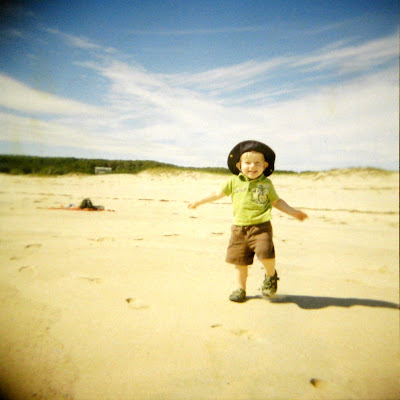 It was June and the water was very cold, but we enjoyed building sand castles, flying kites, watching the seals swim in the surf, walking along the beach and the nearby trails. Not to mention the book reading, and relaxing. Well, as much relaxation as can be had with a toddler running about. 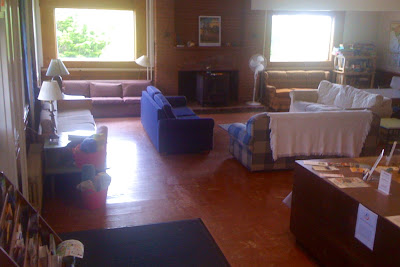 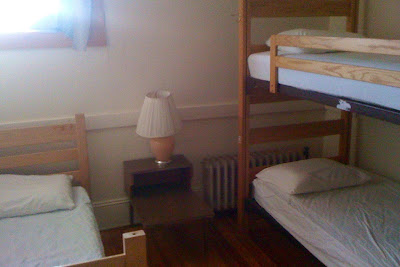 The hostel, like most, is no frills and comfortable with a large sitting room and spacious dinning room/kitchen, with plenty of fridge space and cooking implements. We brought all of our food, but next time we would buy all of the heavy stuff, if not everything, at the upscale market at the corner of South Pamet and Truro Center Road (the premium is more than offset by not carrying as much).

The hostel is maybe 100 yards from the beach, and they have all of the beach stuff you could want, chairs, towels, blankets, umbrellas, buckets, shovels, etc. We would leave all that home next time too. The beach is a wonderful place to walk (in fact I walked my son out their both nights to lull him to sleep in the unfamiliar place). Along the beach I could easily imagine walking all the way back to P'Town. In addition to the beach, there are numerous inland trails, just on the other side of the dunes. These are mostly woodland, but often wind up to the top of grassy dunes (read small hills) with great views of the ocean, and sometimes back to the bay. I hear these trails parallel the beach much of the length of the cape. 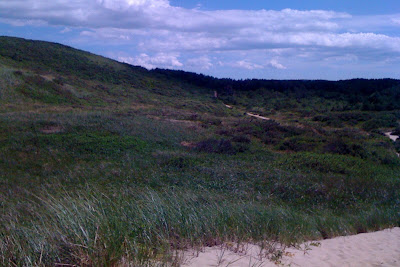 All in all this was a great destination and trip. It will be perfect when I find an alternate to US6, so next time we'll stay in P'Town. It may not be soon, but we will go to Truro again. If you would like to hear a different perspective of a Cape Cod bike trip check out our friend's trip a couple years ago. 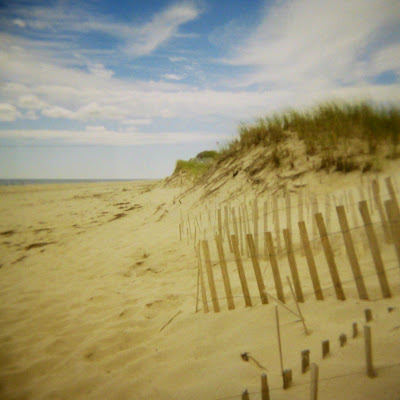 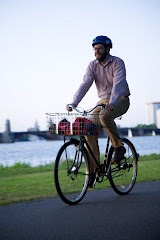 A Jaunt Along the Esplanade

A Jaunt may be described as a short excursion for pleasure or refreshment, but most certainly light-heartedly. It is a ramble, but may also be to prance or frolic.

A Bummel is a journey, long or short, without an end; the only thing regulating it being the necessity of getting back within a given time to the point from which one started. Sometimes it is through busy streets, and sometimes through fields and lanes; sometimes we can be spared for a few hours, and sometimes for a few days. But long or short, but here or there, our thoughts are ever on the running of the sand. We nod and smile to many as we pass; with some we top and talk awhile; and with a few we walk a little way. We have been much interested, and often a little tired. But on the whole we have had a pleasant time, and are sorry when it's over.
(JK Jerome, Three Men on the Bummel)